The first coin to ever have the motto IN GOD WE TRUST placed on it was the Two-Cent piece in 1864. This earlier version of production displayed smaller sized letters and the obverse hub was only briefly used. As a result, the Small Motto version is now one of the two key issues in the series along with the 1872. Gem issues are scarce, let alone fully red examples. As only 8 pieces have been graded by PCGS as MS66 Red, this coin is considered a Condition Census example. Incredibly well-preserved with stunning red mirrors, the strike is also something to behold. A finer example cannot be found, privately or publicly, allowing this piece to be the capstone of what could in the future, possibly be the finest Type Set or Collection of Two Cent pieces.

A short-lived denomination, but popular amongst collectors.

Lovely olive-brown surfaces are lustrous and well struck! A short-lived denomination, but popular amongst collectors. Only the 1864 has a higher mintage making this a great type coin.

A lovely gem from the Civil War era with gorgeous red surfaces and satiny luster.

An underrated date in the short-lived series, red examples are very unusual to come by.

The 1872 2-cent business strike is the key to set and much tougher than the 1864 small motto in our experience.

The 1872 2-cent business strike is the key to set and much tougher than the 1864 small motto in our experience and this is an example of the rare double die variety. This well-struck near gem is so close to gem status with satiny deep chocolate surfaces and great eye appeal.

Spectacular gem! Sharply detailed throughout with strong doubling is most apparent on the letters in TRUST. Original golden orange surfaces overlaid in attractive amber-brown tints. CAC approved for quality. 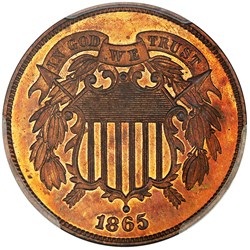 A low mintage proof of just 500 coins struck. Among the finest in this category, this registry quality gem proof displays extraordinary eye appeal! As expected the strike is needle sharp and each side displays marvelous field reflectivity and beautiful cherry-red and golden-orange color. 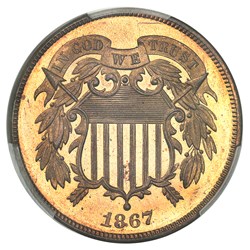 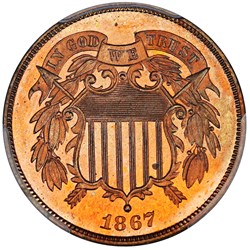 Of the 625 coins struck, only a handful remain with fully red surfaces and this beauty retains magnificent red-orange color and beautifully reflective mirrors. The strike is sharp, as expected and the eye appeal is superb! 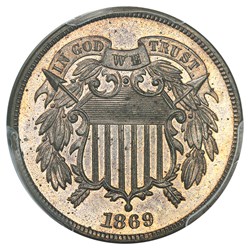 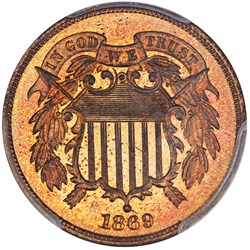 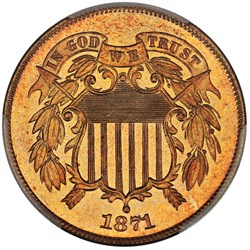 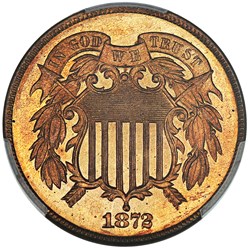 Stunning gem example from a low mintage proof of just 950 coins struck. Only two examples between both services have been graded finer at this level of contrast, with only a single cameo specimen known! Gorgeous mirrors glow with golden tints and bold reflectivity. Needle sharp details and wonderful eye appeal, a great piece for the registry collector.