A spectacular overdate which is most notable on the 1 digit,. A massive die break on the reverse adds interest. Totally original.

The Draped Bust, Small Eagle half dollars of 1796 and 1797 have long been considered rarities of the U.S. half dollar series, joined together by both their low, combined mintage of 3,918 pieces, as well as by their status as a two-year design type. Mint records note that all of the coins dated 1796 were struck and delivered in 1797. Beyond that, actual mintages for the different issues are just educated guesses. Approximately half of the mintage was dated 1796, and the other half 1797. A tough coin to locate in any state, this piece is bested by a VF30 that resides in the primary collection of Hansen coins.

Better date in the draped bust half dollar series. Large 3 variety with orange-gray toning throughout and some luster remaining beneath.

A pleasing example of this early Draped Bust Half Dollar. A boldly repunched T in LIBERTY is evident and easily viewable without the aid of a loupe.

Popular Draped bust half dollar type coin. This is the pointed 6 with stem variety. Natural toning and CAC approved for quality.

Popular Draped bust half dollar type coin. As the saying goes, "This is how they're supposed to look." Completely original with luster and complex toning. An easy decision for CAC. 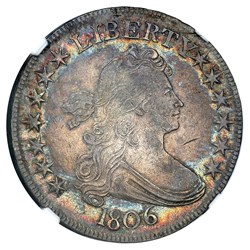 Gorgeous rim toning with light gold, red, and blue tints cascading off of the rims towards the centers.

Great draped bust half dollar type coin with outstanding luster and flash. Certainly worthy of the CAC sticker and a premium!

Lovely example! Crisp details and plenty of luster standout beneath rich patina. The number one set holds a MS66 example for the date.

Only lightly toned with the typical strike for these early dates.

Well struck for the year, with pleasant, natural toning. A pleasing example with nice luster.

Satiny luster shines through patina of lovely golden-grey toning on both sides. Boldly struck and distraction free, the eye appeal is excellent!

Nearly impossible to find in this state of preservation. After taking a two year hiatus, capped bust halves were resumed in 1817, but the 1813 die was repurposed, producing this exciting overdate!